Alex Vega was born in Miami, FL on August 19, 1974.  Alex’s passion for cars began when he was a young child.  He grew up watching classic TV shows and movies, such as Dukes of Hazard, The A-Team, Starsky & Hutch, Speed Racer, Knight Rider, Batman and Back to the Future. The cars in all these fan favorite movies had one thing in common… they inspired Alex to one day build a bad ass car that would inspire others to dream big, and chase their dreams.  While growing up, he would share stories of building a car that would be be showcased in a star-studded movie and everyone would know that he – ALEX VEGA, had created it.

In 1992, Alex graduated from South Miami High School. As with most kids, to try and please his parents he went straight to college after high school. That short experiment only lasted 24 hours. He immediately walked out of class after a professor embarrassed him in front of other classmates for misspelling a word. That life learning moment ended his short college tenure. He then went in pursuit of his heart’s dream, which was to build the baddest cars in the world.

Shortly thereafter, Alex Vega started working in a Miami Firestone service center as a Salesman. From there he worked at many other car service companies building his craftsmanship in the automobile industry. In the year 2000, he started working for a company that provided bodywork, wheels, tires and audio system installation for high-end customers. The company’s management recognized his hard work and professionalism on a daily basis. He was quickly promoted to general manager and for those two years he was living his dream of customizing cars.

WHEN A BUSINESS DEFYING MOMENT SPARKS YOUR LEGACY
In 2002 is when people in the industry started recognizing his star potential. A client of Alex made him an offer of a lifetime, to open up his own shop. The offer was for Alex to operate the shop for two years and then the agreement indicated that he would become an official partner after building the business into a positive returns investment. Alex held his part of the bargain and built a profitable company from the ground up. Once the two years passed, Alex asked him about becoming a partner. He looked Alex straight in the eye and said he had everything that he needed to run this company without him. Alex just smiled in disbelief and wished him the best of luck, and never looked back.

BEHIND EVERY GREAT MAN THERE IS A GREAT WOMEN
When Alex arrived at home, he shared the unfortunate business mishaps that occurred with his wife. She didn’t even hesitate in encouraging him to sell their home to open Alex’s first solo business venture.

In 2004, thanks to his wife, he was able to open his own auto customization company. That life changing business moment led to him building his auto business empire in six years.

In 2010, a local body shop made him an offer to move his business next to his location to join forces and take their businesses to the next level. At the time, Alex didn’t have his own body shop and thought this would be a great idea. Even though Alex was burned in the past, he took a business gamble to partner with someone who had a fully operational body shop. After pouring his hard work and dedication into the new venture for six months, he quickly realized that all his partner wanted was to take away everything he had built and worked so hard to establish during those years of business.

NEVER LOOK BACK AND ALWAYS FORWARD TO THE BRIGHT FUTURE
Alex walked out and left all his equipment and inventory behind. At the end of the day, all his partner wanted was his high-profile clientele and Alex’s business operations.

Alex wouldn’t be broken with his bad partner misfortunes again. He knew that no matter what, no one could take away the auto industry name he built throughout the years and reputation known by many.

He recalls this day as if it was yesterday. Alex went home to his wife that day and shared the unfortunate business happenings that occurred once again. She looked at him and said, “We have done it before, and we will build it again. We will start with zero but this time around, I’m coming with you.”

And that’s how The Auto Firm legacy started. At this point in his business career, he didn’t trust anyone outside of his direct family circle. Alex brought in his father, niece and his son Jr. along with his wife. After his son finished high school he was brought into the business by Alex to learn the auto customization ropes. His younger son Adriel is now also getting involved in the family business. Alex is looking forward to his boys building the family business for years to come.

Alex is now living his childhood dream with his family by his side to protect him and make sure nothing will get in the way of building the family empire known as The Auto Firm. Today, The Auto Firm is one of the largest custom shops in the automotive industry and caters to anyone looking to personalize their ride. Alex is known to be the main designer for the entertainment industry, including elite athletes and world-renowned celebrities who go to him for all their automotive needs.

Alex’s life story is a perfect example that no matter how many times you are brought down… if you are honest, have faith and work hard, you can achieve anything your heart desires.

Make sure to visit www.AVORZA.com to learn about the building his very own brand, AVORZA. 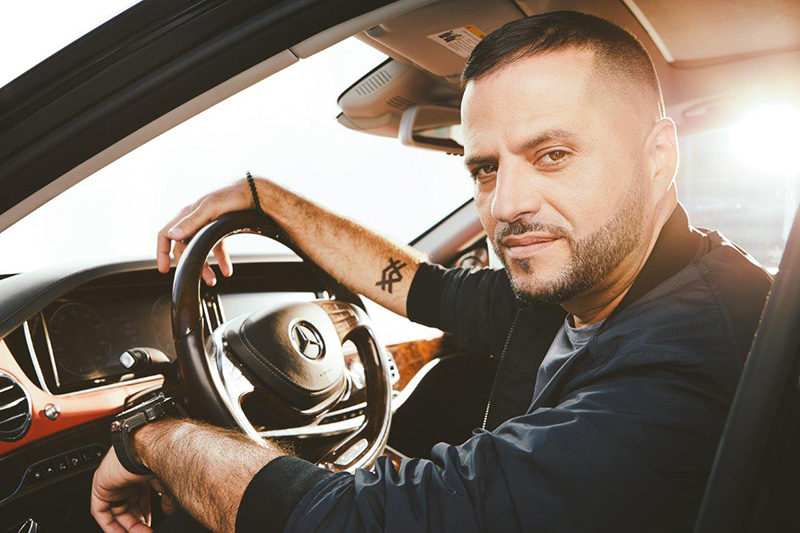